The main active ingredient in the tobacco plant is nicotine:

Nicotine is also marginally present in other plants of the Solanacea family (2–7 µg / kg); tomato, eggplant, pepper and potato. In even more marginal amounts, in plants such as cauliflower, green pepper or black tea. 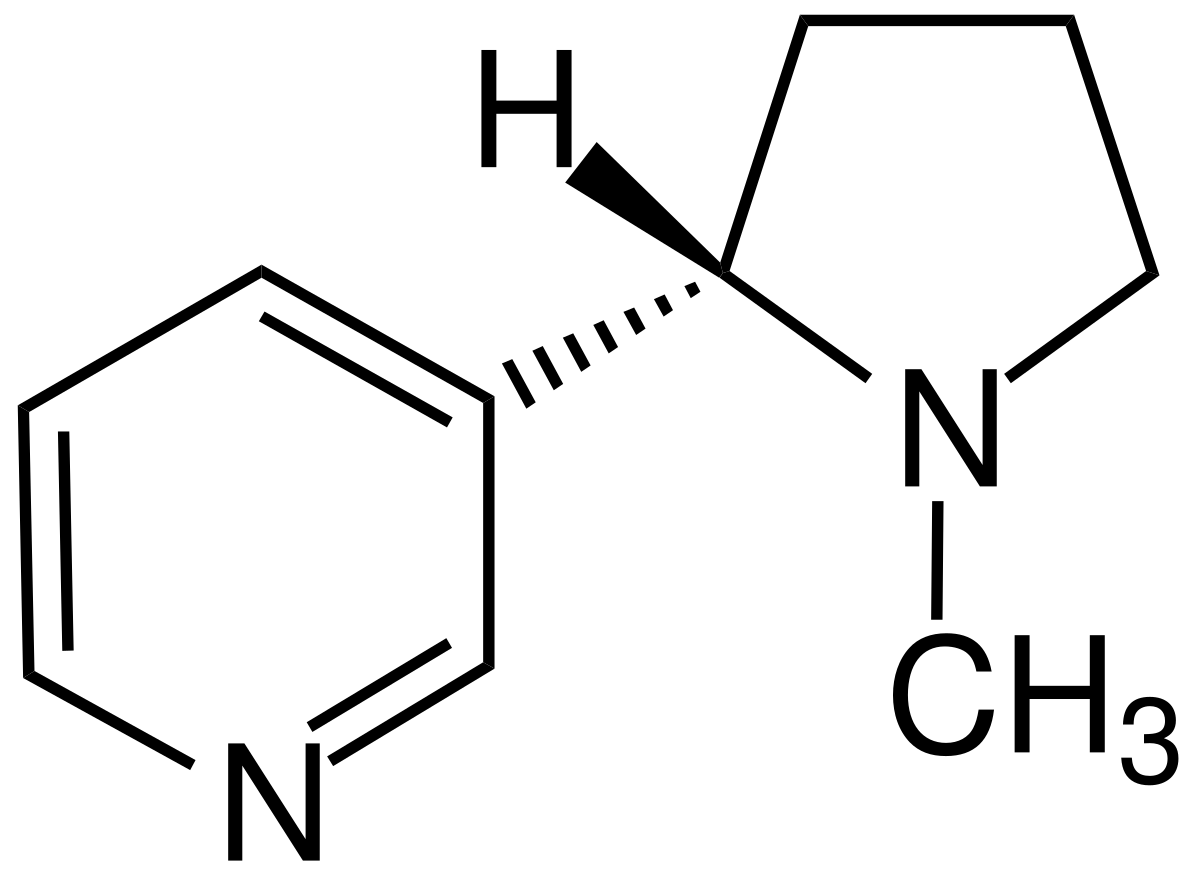 Structure: It has two mononitrogen heterocyclic nuclei: a pyridine ring and a pyrrolidine ring.

Biosynthesis: It is synthesized in the areas of greatest activity of the roots of tobacco plants and is transported by the sap to the green leaves.

Dependence: Nicotine is one of the most addictive psychoactive substances that exist.

Suppressed psychological traits, for example, users with a previous history of depression, may experience a bout with withdrawal.

About the central nervous system:

Produces central stimulation. Most of the behavioral effects of nicotine are produced by the activation of nicotinic receptors in the CNS.

At the brain level: It acts in the presynapsis and reinforces the release of neurotransmitters such as acetylcholine, dopamine, norepinephrine and serotonin.

Cigarette smoking: the need for action by health professionals. 1988

About the limbic system:

It has a rewarding effect on the limbic system, mediated through the neural pleasure pathway (high doses).

On the cardiovascular system: peripheral vasoconstriction, tachycardia and hypertension.

In both smokers and non-smokers, the administration of nicotine produces a significant increase in systolic and diastolic blood pressure and heart rate. There is also an increase in the number of leukocytes, platelets, fibrinogen and hematocrit, also showing an increase in coagulation.

Activation of the adrenal medulla releases norepinephrine and epinephrine.

Receptors: Nicotine produces neuronal excitation by producing the opening of nicotinic cholinergic receptors, to which it binds selectively.

It binds selectively to nicotinic cholinergic receptors, presenting an activating action at the beginning and a blocking action later.

SMOKING: The passage of membranes depends on the balance between the ionized and non-ionized forms of Nicotine, which depends on the pH of the medium.

– When the medium is basic, nicotine tends to be non-ionized, it is fat-soluble and easily crosses biological membranes.

In cigars and pipe tobacco, which are alkaline, nicotine is more absorbed through the oropharyngeal cavity without the need for the smoke to be swallowed.

-When the medium is acidic, nicotine tends to be ionized and has difficulty crossing biological membranes.

In cigarette smoke, which is more acidic, it has to be inhaled, absorbing nicotine especially in the lung, due to its more alkaline pH.

The faster the absorption of a substance, the higher the plasma levels that are reached and the faster its fall.

As its absorption is faster, cigarettes reach higher and shorter nicotine peaks than with cigars and pipes.

The addictive capacity of a substance depends directly on how quickly its central actions occur and how intense they are. For this reason, inhalation is a particularly addictive mode of administration of a substance.

Review of the evidence that pH ia a determinant of nicotine dosage from oral use of smokeless tobacco.Tob Control 1997; 6: 219-225

Oral and chewing preparations undergo a first hepatic passage, lower concentrations of nicotine reach the systemic circulation and partly because of this they have a lower addictive potency.

Distribution: Once in the body, nicotine is rapidly distributed to the blood and tissues, since at blood pH it easily crosses cell membranes. Due to its high fat solubility, it crosses the blood-brain barrier.

After smoking a cigarette for about ten minutes, the peak plasma nicotine concentration rises to about 25-45 ng / ml.

-At the end of the day, higher nicotine levels are usually present due to an accumulation after several hours of regular smoking.

-The intake of food produces an increase in hepatic blood flow and a consequent greater clearance of nicotine, which would explain the urgency with which some consumers have to smoke after eating.

Half-life: Levels are halved in about two hours.

Liver Metabolization: Nicotine is metabolized mainly in the liver, through the group of cytochrome P450 enzymes (CIP) (which eliminate substances that are not synthesized by the body itself), which converts it into cotinine, which is eliminated by the urine.

Cotinine also interacts with the nicotinic receptor and may contribute to the neuropharmacological effects of nicotine. Cotinine levels are about 10-15 times higher than nicotine levels, since its half-life is longer, about 20 hours.

In humans, 70-80% of nicotine is metabolized by CYP2A6, of which three variants have been identified: the normal CYP2A6 * 1, and two others associated with reduced activity of the enzyme. The presence of abnormal variants among smokers is less frequent than among non-smokers. Those with abnormal variants smoke fewer cigarettes per day and are more successful in quitting.